Article by Kayla Hamelin of the Canadian Sea Turtle Network 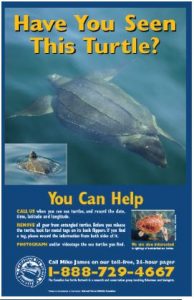 The Canadian Sea Turtle Network is a Halifax based environmental charity that works to study and conserve endangered sea turtles in Canadian waters and beyond, with a particular focus on the leatherback sea turtle. This is actually quite a tall order. First of all, leatherback turtles are enormous; about six-feet long and tipping the scales at 1,000 lbs on average. They are also the most wide ranging reptile, travelling tens of thousands of kilometres between northern foraging areas in Atlantic Canada that host large seasonal aggregations of jellyfish (their favourite food), and tropical nesting beaches throughout Latin America and the Caribbean where they lay their eggs. When they are here in Canadian waters, they spend the summer months just offshore, feeding, out of sight (and, sometimes, out of mind) of most Canadians. Up until about 20 years ago, the sea turtle science community believed the leatherback to be a tropical animal and thought any animals
found in our waters were here by mistake.
But local coastal community members in our region knew the leatherbacks were here, particularly the fishers of Atlantic Canada. And as scientists interested in studying these turtles in the north, we needed their help.

It was out of a collaboration between our scientists and Atlantic Canadian fishers and
coastal community members that the Canadian Sea Turtle Network was born in 1998. Initially, we
launched a citizen science project encouraging fishers and other mariners to call in sea turtle
sightings. Thousands of confirmed sightings later, it is clear that Atlantic Canada is an important
part of the leatherback’s habitat. In fact, specifically during the summer months, we host
more foraging leatherbacks than almost anywhere else on earth.
By taking the time to write down a few observations and take a few photos for us, regular citizens changed our global understandingof these gentle giants. Local fishers continue to be our most important research partners,and we’ve combined our scientific know-how with their practical skills working at sea to do ground-breaking work capturing and tagging leatherbacks, allowing us to document their jellyfish feeding and long-distance migrations in real-time.

Although our research program has now expanded considerably, we continue to accept
sightings from citizen scientists (like you!).
Please call our toll-free turtle hotline 24/7 at1-888-729-4667 to report a sighting. We encourage anyone on the water this summer to keep their eyes peeled for a shiny turtle head popping up or the splash of water streaming off of the ridges of its carapace as it surfaces to breathe. Leatherbacks swim the world’s oceans solo,save for brief mating periods. Imagine their lives: swimming endlessly for decades, alone in a vast, watery world. But as leatherback researchers, we can’t succeed in our work on our own. We would love for you to help. To learn more, or for more information on how to get involved, please visit
www.seaturtle.ca or drop by our Canadian Sea Turtle Centre at the Halifax waterfront during the summer and fall.

Chester Race Week is one week away! Canada's largest keelboat regatta starts on Wednesday, August 10 and runs through to Saturday, August 13. More than 100 boats registered to race. And there's more to check out, including live entertainment at Chester Yacht Club each day, and a new market on the Wednesday, Thursday, and Friday.