Welcome to the Dock Marina Restaurant and Gallery, a restored historic fishing premises. The fish trade began on this site at the turn of the 18th century. Joseph White, a Quaker from Poole, England, operated a fish business here in the early 1700’s. It had been a going concern from the days of the original owners, up until 1953 when the firm Morris and Company closed it’s doors after 100 years in operation. Business on this site was the longest continually operated in the history of Trinity. The building was then unoccupied for 40 years. During that time it had deteriorated to the point where it was ready to collapse into the water.In 1992, Art and Louise Andrews bought the premises and began restoration, by first constructing the wharf and then renovating the interior. The business opened and successfully operated under their leadership until 2012 when it was purchased by its current owner, Corey Jones. 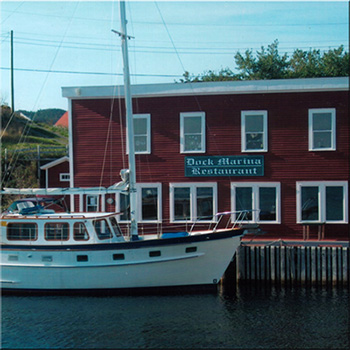 Hey, you should come visit the Bay of Fundy and the St John River too!! 😉